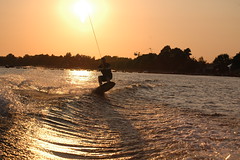 The evolution of wakeboards, wakeboarding tricks, wakeboarding wetsuits and the environments tackled by wakeboarders has been a remarkably rapid process. It was not so long ago that someone first thought to attach foot straps to a surfboard and tow the whole setup behind a motorized vehicle. It was only the early 1980’s that this moment occurred, and wakeboarding has been on an upward trajectory of progress and innovation ever since. Now wakeboarding is recognized as a sport unto itself, with its own particular equipment, tricks, and styles. Here are some of the key innovations that illustrate the rapid rise of wakeboarding into the unique sport it is today.

The legends of early wakeboarding say that the first boards were towed by a truck driving along the shoreline of the ocean. Since then, wakeboarding has expanded to more locations than its originators could have imagined. Wakeboarding is commonly done in lakes, where the riders can be towed by a rowboat or jetski. Increasingly common are closed cable parks, in which vehicles with tow ropes are replaced by electrically powered motors suspended above the course. Oftentimes, these settings are equipped with other obstacles that the rider can use to perform tricks. What results is an range of tricks and maneuvers reminiscent of skateboarding. For example, a wakeboarding-friendly lake might feature launch ramps, ledges and rails, and some cable parks might even contain drops and gaps for wakeboarders to jump over. Taking this approach to tackling obstacles even further, some wakeboarders will look for obstacles on the shores beside rivers or canals, or even areas or waterways next to dams and drainage tunnels. In these shallower waters, the riders are more likely to be towed by a jetski rather than a boat.

A similarity between wakeboarding and other board sports is that some of the most technical and impressive tricks are those that involve a high number of rotations. From the fist time someone did a 180 and started riding switch stance and/or fakie (traveling backwards), riders of wakeboards, skateboards, snowboards, and surfboards have been pushing to limit toward spinning in ever greater circles. Each time someone lands a trick with an additional 180 degrees past the previous maximum, the expectations of what is possible have been exploded. In wakeboarding, this moment happened in 2008, when Danny Harf landed the first 1260 – that’s three and a half rotations, with the added difficulty of having to pass the tow rope behind the back after each spin. Granted, it is risky to compare rotations between board sports – bodies clad in wake wetsuits have different levels of agility, and landing just a 360 in street skating is still considered a fairly advanced trick, while skiers and snowboarders have gone as high as 1620. But the wakeboard record is remarkable because it marks the sport’s rapid progression, from struggling to stand up against the force of the tow line to sticking 1260’s in only a few decades.

And of course, there are the wakeboards themselves. What began as a surfboard with improvised footstraps has matured into a board sleek enough to cut through a powerful wake, and light enough to give the rider the temporary power of flight. Some riders have even gone back to the pre-footstrap style, rejecting bindings in favor of a “wakeskate” that allows for the board to be flipped and spun independent of the rider. As the sport has become increasingly technical, wakeboarding wetsuits and other specialized gear has also emerged. No matter what kind of board used, the fact remains: wakeboarding sprang from nowhere and now it is pushing the boundaries of strength and style in the water.

Although wakeboarding began just a few decades ago, now riders clad in wakeboard wetsuits are pushing the limits of technicality and style.

Vote on the Miss Wakeboarding Contenders...

Nice Sailfish by @cole_tristram on the Sea Horse!

Reference last post: The Osprey eye view of the ot

Nice shot of Big Frank with a Large Permit caught

Spirit of the sword! Thoughts and prayers out to t

FREE Shipping on US Orders of $50 + Dismiss