You are here: Home » Tropical Log » Spearfishing » Mastering the Art of Making Passion a Reality: Spearfishing 101

Mastering the Art of Making Passion a Reality: Spearfishing 101 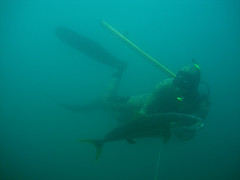 Ever since time immemorial, man has devised and designed thousands of ways to conquer the elements and the odds. This desire to overcome has become a passion of sorts, something that sometimes takes precedence over other important things in their lives. This passion is most evident in the way they take to extreme sports, like breath-hold spearfishing.

Nothing is able to challenge man more than being able to conquer immeasurable and nearly impossible odds and spearfishing, an ancient method of fishing as old as ancient civilization does exactly that. From the time only sharpened sticks were used 20,000 years ago to these modern times when elastic spearguns and slings are used, the thrill of the hunt and chasing prey until it is cornered and captured, hasn’t dampened the enthusiasm for this sport one bit. View Spearfishingproducts website for more about what makes spearfishing more than just a hobby for most people.

Spearfishing began in the Paleolithic Age, with early man using stone tools to catch their prey. These tools were a marked improvement over sharpened sticks and allowed man to cover wider ground as far as finding food was concerned. Many historians as well believed that the symbolic trident held by Neptune the God of the Sea was actually a harpoon and as such, many early fishermen, including early Egyptians, Inuits, ancient Hawaiians and Mediterranean folk used primitive, sharp-tipped harpoons that helped make targeting and catching prey faster and easier. They also used wooden spears that were about six to seven feet long and built fishponds were they perfected spearfishing techniques as well as continued to invent better and more modern weapons to catch prey. Learn more about the evolution of spear fishing and more in spearfishingproducts.com.au, which is a site devoted to everything and anything about spearfishing.

In 1870, the first pressurized spear gun was invented, the purveyor of today’s modern models. Its invention allowed practitioners to fish in deeper waters, training divers to be able to hold their breath under water for up to four minutes or longer. Consisting of basic components like the spear, a stock/barrel and a handle/grip that contains a trigger mechanism, it is usually between .5 to 2 m in length and roughly round or rectangular in diameter.

There are two most common types of spearguns, namely the rubber powered, which is the least expensive and easiest to maintain and the air powered or pneumatic speargun. Learn more about the speargun in www.spearfishingproducts.com.au and find out why it is one of the most important equipment that spear fishermen need to have and invest in.

The passion for spearfishing grew so much that by the time the 1950s rolled around, it has become a competitive sport more than as a means of sustenance. This fact became even more pronounced with the invention of additional safety equipment like goggles, snorkels, wetsuits and fins. Divers learning advanced free-diving techniques further contributed to it becoming the highly competitive extreme sport it is today. Despite the many changes and developments the sport has gone through, it is for most enthusiasts the most basic but also the most adventurous way to fish, the ultimate way to hunt.

In addition it is also the most challenging, what with having to do it diving in one breath and overcoming more than your fair share of odds. No wonder it has become more than just a hobby and definitely one adventure that is definitely not for the faint-hearted. Who wouldn’t want to prove that they have the ability to kick down 55 feet under water and resurfacing in one breath? If you want to turn your passion into reality, you can start checking out sites like Spearfishingproducts.com.au, find more spearguns in Australia in Spearfishingproducts.com.au and understand what is it about this extreme sport that makes most people want to go under.

Spearfishing, which is a type of one breath diving sport, is certainly becoming more than just a hobby for most. Find out more about spearfishing and more in www.spearfishingproducts.com.au and what you need to succeed at this exhilarating exercise.

5 Pieces Of Scuba Gear For Spearfishing That...

TBT to a few weeks back, locking in some of them l

Fall is rolling in slowly this year down south but

When they close the gag grouper we target the mang

Tropical Views from the eye in the sky🏝📸👌

It's been a great year and there are only better t

FREE Shipping on US Orders of $50 + Dismiss